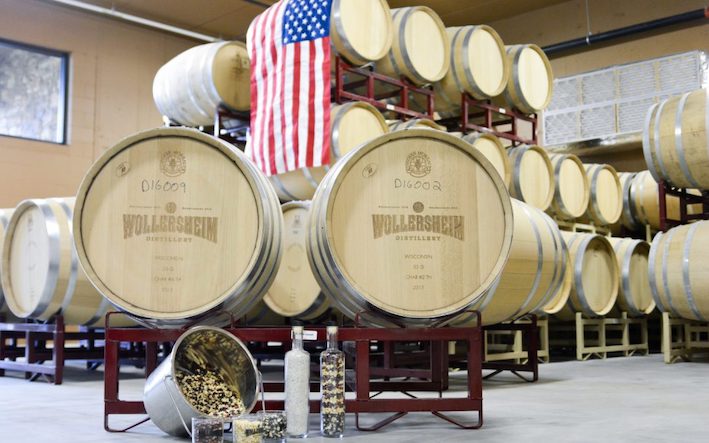 Philippe Coquard is a man of many passions. From spending much of his life making wine, to riding and collecting motorcycles, devoting time toward interests have been a priority ever since he grew up in the Beaujolais region of France.

Coquard and wife Julie, who run the historic Wollersheim Winery & Distillery in Prairie du Sac, have dedicated much of their lives toward making the best products possible for their customers. And since taking over as Wollersheim’s winemaker in 1984, Coquard has remained committed not only to the business, but also to giving back to those who devote their lives to defend our freedom.

Wollersheim has been a supporter of various fundraising efforts and events for those who serve or have served in the military. In years past, Coquard and his family have worked extensively with the Badger Honor Flight and other initiatives involving military Veterans, including welcoming area World War II Veterans to the sprawling grounds to gather and play cards.

But Coquard wanted to do something truly unique. Something that’s both special and meaningful, but will also have a wide reach and help as many Veterans as possible. So about three years ago, Coquard and his son-in-law hatched a plan to use their expertise and do something they’ve never done before: Distill special, American themed bourbon and donate the proceeds to Veterans Service Organizations.

After many years of trying, Wollersheim transformed its business when it became legally able to distill brandy and other spirits on the property in 2010. Since then, the team has used their knowledge and ingredients to produce highly-rated spirits like the Round Top Rye Whiskey, Coquard Brandy, Garden Gate Gin and many more.

One of the most essential parts of the distilling process, Lenerz said, was maintaining the precise percentage of each colored corn in accordance with its appearance on the American flag.

“When we made the red whiskey, the white whiskey and the blue whiskey, we thought, ‘Why don’t we set aside some barrels for a fundraiser?” Coquard said of the genesis of the idea.

Coquard said that his desire to give back to Veterans started while he grew up in France. While immersed in winemaking at a young age and helping on family farms, he’d always heard about the role American soldiers played in liberating France during World War II.

When he moved to Wisconsin to work at Wollersheim on an agricultural exchange more than 30 years ago, the patriotism and culture struck Coquard, he said. So, when he saw an opportunity to create a product unlike any other for a good cause, it was a no-brainer.

“Knowing that it’s going to go to the Vets, I wanted to make sure that we do something with the red, white and blue,” Coquard said. “As a group, we have a lot of respect for the flag, and I think that’s how it came about.”

Currently, the bourbon is maturing in Wisconsin oak barrels with an anticipated release date set for Armed Forces Day (May 18, 2019). Wollersheim intends on releasing the exclusive bourbon during a fundraiser at the winery and distillery, inviting Veterans and stakeholders from across the state to join in the celebration.